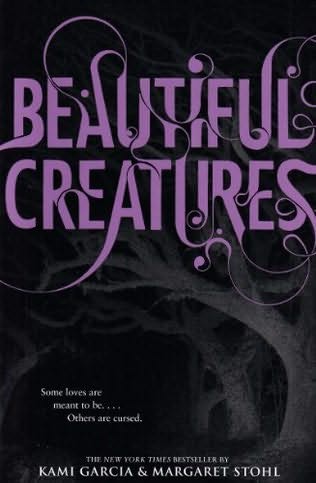 In Ethan Wate’s hometown there lies the darkest of secrets…
There is a girl.  Slowly, she pulled the hood from her head…green eyes, black hair.  Lena Duchannes.
There is a curse.  On the Sixteenth Moon, of the Sixteenth Year, the Book will take what it’s been promised.  And nothing can stop it.
In the end, there is a grave.
Lena and Ethan become bound together by a deep and powerful love.  But Lena is cursed and, on her sixteenth birthday, her fate will be decided.  Ethan never even saw it coming.

The Beautiful Creatures series had completely passed me by until I saw a poster advertising the new film, starring Jeremy Irons, in London over the Christmas break.  As soon as I saw the poster, I knew it must be a film of a YA book and vowed to see what it was like.  Then, I found the hype!  I hope I’m not last to the party, but I think I may be as the rest of the series is already available.

Well, better late than never.  While not short, at 563p in my paperback edition, I found Beautiful Creatures a fun, easy and engaging read.  The story concerns an apparently doomed romance between two teenagers, one ‘normal’ and one magical.  There’s high school drama, some concerns about being able to do ‘normal’ teenage things like going to prom, and some not inconsiderable angst about whether the magical one’s powers are going to hurt the mortal one.  So far, so Twilight.

Now, comparisons to Twilight are not necessarily a bad thing; the end of the series, not only in print but on the big screen, left a gap in the paranormal teen romance genre and I’m sure Beautiful Creatures is being groomed to step up to the plate.  However, Twilight also had a bad rap from a number of critics, due to the quality of dialogue, the poor role model provided by Bella Swan and the ‘abusive’ relationships between Bella and Edward.  Happily, Beautiful Creatures avoids these pitfalls.

The novel is written from the point of view of Ethan – a refreshing change in this genre to have a male narrator.  The prose style is well-chosen, clear, sharp and very effective in its use of detail and description to create an atmosphere of a claustrophobic small town in the southern states of America.  I also thought the dream/flashback sequences were particularly well-written; in these, Ethan is shown tantalising glimpses of Lena, and of why it may be that the two of them are so inextricably intertwined.  They’re also a great device to drawn the reader into the mystery behind the story.  Garcia and Stohl take care to make sure Lena and Ethan are equally important and valued throughout the novel, as well as in their relationship.  Lena has a lot of power, but also feel the natural concerns of a teenager.  Ethan is negotiating high school, trying to fit in, but bonds with Lena of their shared love of books and reading.  Their relationship is positive and supportive, even if it is always under threat.

I think that part of the reason Twilight was so successful, despite Bella being whiny and Edward being abusive, is that whiny, self-denying Bella taps into the worst place all women have been relationship-wise, albeit hopefully not permanently.  Also, like it or not, the Twilight saga has very clear ‘rules’ with regard to its own mythology that it sticks to consistently, and it’s very well plotted.  There’s lots of peril and suspense which keeps the reader interested, but Meyer knows not to try to pack in too much content or backstory which would muddle the flow and hinder the pace.  I felt like Beautiful Creatures had the opposite problem, its only real drawback.  Garcia and Stohl don’t resort to forcing women to dredge up their worst self in order to sympathise with Lena, but there is just so much in the book that at times it’s overwhelming.  There’s plenty of plot here to keep any peril-hungry reader happy but I found the mythology, the ‘rules’ of the Southern Gothic witchcraft, confusing.  I felt perhaps the authors were trying to include more than was really needed to grab and hold our attention; this is why writers like Rick Riordan have published additional volumes which go into the back story and the ‘in the meantime’, so as not to interrupt the flow and pace of the story.

Despite the somewhat muddled mythology, I did enjoy reading Beautiful Creatures.  I was grabbed by the characters, the pace of the story – it really zips along – and the fantastically vivid world they create. I’ll be reading Beautiful Darkness, the next in the series, as I do what to find out what happens next.  I’m hoping that, now we’ve got a lot of explaining out of the way, there’ll be a higher proportion of story to information.  I would recommend Beautiful Creatures as a fun, action-packed read for teens who enjoy a bit of paranormal and magic with their high school drama.

Beautiful Creatures is published by Razorbill/Penguin
Find out more at http://spinebreakers.co.uk