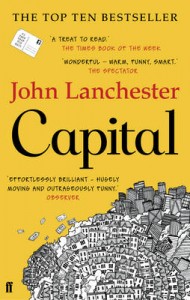 The residents of Pepys Road, London – a banker and his shopaholic wife, an old woman dying of a brain tumour, a family of Pakistani shop owners, the young football star from Senegal and his minder – all receive an anonymous postcard one day with a simple message: “We Want What You Have”. Who is behind it? What do they want?

As the mystery of the postcards deepens, the world around Pepys Road is turned upside down by the financial crash and all of its residents’ lives change beyond recognition over the course of the next year.

I read Capital by John Lanchester on my second visit to Appetite Book Club, at The Old Court in Colchester.  Or rather, I should say I read the first 39 chapters.  I’d seen Capital on the tables in the local Waterstones and I’d been intrigued by the book, with the bright yellow cover and the miniature London.  I love London as a place – its colours, contrasts, history and inhabitants – so I also love reading about it, when it’s written about well, for example A Week In December by Sebastian Faulks, or The Long Firm, or even something like Anansi Boys or Neverwhere by Neil Gaiman.  London is a fascinating place and deserves to be written about in a fascinating, dramatic, magical way.

Capital takes as its centre a road in Zone 2-ish London, urban, residential, with a surprising range of different people living in it and connected to it.  Through their lives, Lanchester explores contemporary issues: Roger is an investment banker affected by the crash and recession; Petunia, grandmother to a Banksy doppelganger, suffers substandard care from a stretched NHS; a Pakistani family grapple with a radicalised acquaintance; a Zimbabwean parking attendant may be returned home after the removal from power of Mugabe.  And they’re all linked together by a strange campaign of postcards, DVDs and a blog.

This seems like a great idea…except it’s one I’ve seen before.  I’ve seen it done much more dramatically in A Week in December.  I’ve seen in done in a more literary, though ultimate unengaging, way in NW by Zadie Smith.  Some of the cast of characters are funny or sweet, and even quite sympathetic – even Roger the banker and his awful wife Arrabella – but in the end, I wasn’t enthused.

I found Lanchester’s style of omniscient narration more of a hindrance than a help at times.  We meet a character and very quickly are introduced to the minutiae of their lives, tens – hundreds – of tiny details that we don’t really need to know in order to follow the plot.  Sometimes this works, for example I enjoyed the Banksy-clone’s thoughts about his replaceable assistants, but sometimes it really slowed down the pace.

I did wonder if I’m just not big on funny books, but in the end I think it’s actually one of the hardest genres to get right.  I like to feel a connection with the characters I read about, which is so difficult if they’re ‘unattractive’ or comically ‘unpleasant’.  Some people at Appetite really did enjoy this, and we did conclude we think it’s a really interesting portrayal of London, but I won’t be recommending this too highly to others in the future.

Capital is published by Faber.