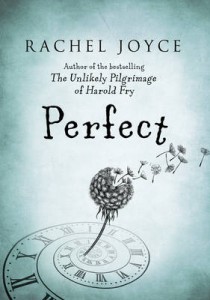 In 1972, in order to balance clock time with the movement of the earth, two seconds were added.  Byron Hemmings knew this because James Lowe had told him and James was the cleverest boy at school.  But how could time change?  The steady movement of hands around a clock was as certain as their golden futures.

Then Byron’s mother, late for the school run, makes a devastating mistake.  Byron’s perfect world is shattered.  Were those two extra seconds to blame?  Can what follows ever be set right?  Infused with the profound insights into what makes us human, lightened with acute observations about the frailties of us all, Perfect is Rachel Joyce at her finest.  A novel about misunderstandings, the small acts of kindness that make the difference and the redemptive nature of time.

When I received my lovely signed copy of Perfect by Rachel Joyce,  I was excited but also nervous – I read and loved The Unlikely Pilgrimage of Harold Fry last year with very little prior knowledge and was drawn into it by the delicacy of the prose combined with the raw brutality of the emotions and impulses contained within the strained, very British, attitudes of the characters.  After reading Perfect, it’s confirmed my opinion that Joyce has an incredible insight into this part of our cultural headspace; few people still consider the repercussions of our rigid class system and ‘stiff upper lip’ which continue to reverberate through our way of life.

Perfect is a split-narrative novel, taking place in 1972, following the adventures of Byron Hemmings and his friend James over the course of a summer, and also in the present day, where we follow the life of Jim, paralysed by anxiety and his compulsive routines to the point where any previous ‘normal’ life has been erased.  As the book progresses, we start to glimpse the links between the two strands, thematically as well as in terms of character and setting.  It’s clear immediately that the place is the same – Cranham, with its stark moorland – but everything else drifts into place delicately and subtly, like the seeds from a dandelion clock.

From the outset, I loved Byron’s innocent, naive view of the world, and the simple, clear voice Joyce creates for him.  He is very observant but doesn’t always understand the implications of which he sees taking place around him, although as an adult reading his point of view, the tensions simmering just below the surface are clearly visible.  There are unspoken problems between his parents – his beautiful mother has few friends, his father returns home only at weekends – and his friend James is no longer allowed to visit after ‘the incident with the bridge’…  Despite this and the huge weight of expectation for his future at such a young age, Byron does his best, takes care of his family and attempts to retain his hopeful outlook in the face of increasingly worrying developments.

Jim, in the present day, is at the opposite end of his journey; he has been in and out of an institution for many years, he has only his obsessive compulsive routines to console him in his solitude and he’s terrified of people and the harm he could cause them.  Yet, there is still hope.  In spite of himself and his fears, he begins to make connections with the unlikeliest of people, in the unlikeliest of places.  Some of his experiences I found incredibly moving and very tough of read about, all the more so because of the subtlety and understated manner of Joyce’s writing style.  The conclusion of the novel moved me to tears.  Nothing about this book is saccharine or sentimental, and I think it’s all the better for that.

“There’s not a thing I’d change about it”

There are many young adult books which deal with themes of identity, self-discovery, breaking out of the the boundaries of class and expectation and also mental health, but new, literary, emotionally engaging books for adults about these themes, and of this quality and truthfulness, are few and far between.  Rachel Joyce should be praised from the rooftops for Perfect; there’s not a thing I’d change about it.

Perfect is published by Doubleday