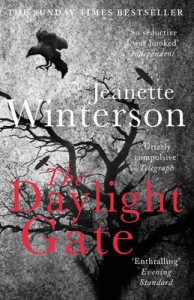 A mysterious gathering of thirteen people is interrupted by a local magistrate.  Is it a witches’ Sabbat?
In Lancaster Castle, two notorious witches await trial and certain death, while the beautiful and wealthy Alice Nutter rides to their defence.
Elsewhere a starved child lurks.  And a Jesuit priest and former Gunpowder plotter makes his way from France to a place he believes will offer him sanctuary.
But will it?  And how can anyone be safe in Witch Country?Despite being (I hope) fairly well-read, The Daylight Gate was my first experience of reading Jeanette Winterson, even though I’ve been recommended Oranges Are Not The Only Fruit many times.  I first heard of the book when it was mentioned by James Dawson, the author of Hollow Pike, a Young Adult novel about teenage social politics and witchcraft, set in the North of England.  As well as The Crucible, he’d been really interested in the British witchcraft culture, especially the Pendle witch trials. Then, I heard it mentioned on Open Book – I loved the idea of Hammer publishing short novels to rejuvenate their brand, as well as introducing established authors to a new audience and genre.  And of course, having studied and taught Macbeth, I knew a little of the historical background – how Shakespeare had cleverly played on James I’s belief in the supernatural to write a surefire hit.  He clearly knew the details of the Pendle trials – a key location, the Malkin Tower, becomes the name of a witch’s familiar, Greymalkin (I always imagine a cat).

In The Daylight Gate, what Winterson does with great style is to take the historical records, such as they are, and weave them into a gripping plot, reimagining brief references to real people as three-dimensional characters: women in the grip of desperation and poverty, and the appalling social mores of the time, victims of religious persecution, and everyone at the mercy of the whims of a paranoid King.

Winterson also introduces other key figures of the period to the mix. It’s a popular theory that part of Shakespeare’s “lost years” was spent as a school master for a Catholic family in Lancashire and he pops up for a cameo in this story.  We also hear about Doctor John Dee, famed as an astronomer, mathematician, alchemist and, possibly, a magician, working in London during the reign of Elizabeth I, and his assistant Edward Kelley. I am a huge fan of Shakespeare and the Elizabethan period, the most fascinating time of danger, discovery, art, espionage and literature, so I was thrilled to meet these characters again, as we find out more about Alice Nutter, the leading lady, her present and her past.

Throughout the book, we’re asked to suspend disbelief and enter a world where magic and witchcraft are possible, although it’s unclear at times who the perpetrators might be, and whether witchcraft is the worst thing going on in Lancashire. In fact, at times, it’s abundantly clear that those who consider themselves righteous are committing far worse things than shapeshifting or using charms; Winterson isn’t afraid to tackle abuses of power beginning with rudeness and ending in sexual abuse.  There are times where it seems that, in fact, all we have a group of poor, disenfranchised, desperate people consoling themselves by calling on mysterious powers to deliver justice and revenge on their oppressors.  At others, it is completely clear that there are greater things are work, perhaps the devil, perhaps magic, which manipulate reality for a price.

I don’t think Winterson wrote this book to “set the record straight” about the women tried and condemned to death for witchcraft in Pendle.  Some have criticised her for that, and even suggested that, were the families of the real women alive today, she would have been sued by them for what she’s written.  In my opinion, that’s completely ridiculous.  Rather, she is using what historical fact and context is available to form the framework over which her story is hung.  In her introduction, she makes it quite clear that the last of Alice Nutter is completely her own creation, and, in my view, a very successful one.  I devoured the book in one afternoon, totally drawn in by the characters and tightly plotted mystery.  This is a grown-up, sexy, feminist story of historical, magical, intrigue and a great first read from the Hammer collection.

The Daylight Gate is published by Hammer.

One Reply to “Review: The Daylight Gate, by Jeanette Winterson”