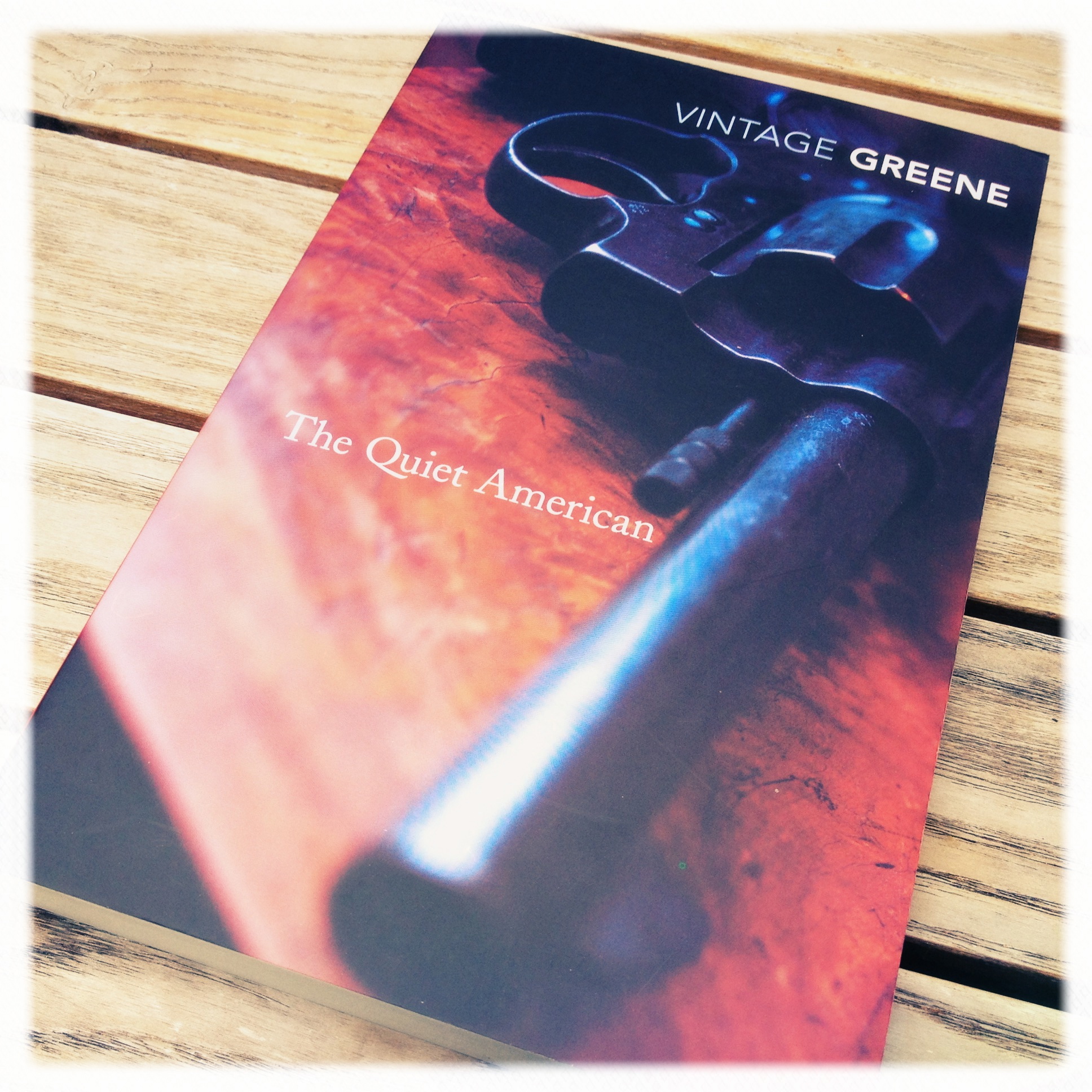 Into the intrigue and violence of Indo-China comes Pyle, a young idealistic American sent to promote democracy through a mysterious ‘Third Force’.  As his naive optimism starts to cause bloodshed, his friend Fowler, a cynical foreign correspondent, finds it hard to stand aside and watch.  But even as he intervenes he wonders why: for the sake of politics, or for love?

As I read The Quiet American, I was reminded again and again of the phrase, plus ca change, plus c’est la meme chose.  This is a novel that deals with eternally recurring questions – of love, of personal motivation, of priorities and even of national preoccupations.  Greene also takes away from the reader the luxury of straightforward characters; Fowler, Pyle and Phuong, not to mention a huge cast of cameo extras, are complex and opaque much of the time, despite their stated opinions and intentions.

I chose to read The Quiet American as part of Simon Savidge (@SavidgeReads)’s Greene For Gran, a chance for people to remember and celebrate his Gran who recently passed away; Graham Greene was her favourite writer.  Although I don’t share that view, I can certainly see why.  His writing is perceptive in terms of character and politics, while his air of detachment from proceedings (I felt that Fowler was standing in for Greene in most of the book) meant you were allowed to consider the situation objectively rather than being obliged to choose a side.

Fowler’s stance of non-engagement could be in some ways off-putting, as it might seem callous, but it is also understandable.  He’s a middle-aged man who is in Vietnam as a journalist, not to influence events, but his philosophy seems to extend also to his relationship with Phuong.  He is a realist – he knows that he isn’t a brilliant prospect as he not rich and has an (estranged) wife back in Britain, so he’s not able to marry.  This means Phuong’s sister is actively looking for preferable matches, like the affluent young Pyle.  When Pyle declares his love for Phuong, almost immediately, Fowler’s reaction is strangely muted and fatalistic. Rather than actively fighting for her, he seems to accept that she will make her choice and is resigned to that, even though he is unhappy at the idea of losing her.

In many ways, then, Pyle could be a more sympathetic character.  He’s sweet, naive, heartfelt in his speech and actions, dedicated in his beliefs.  He’s an idealist, hoping to be able to make the world a better place.  He falls in love with Phuong quickly, desiring to protect her, to rescue her from what he sees as a potentially sordid life dancing in a bar and ballroom club.  Ironically, though, he has a more colonial attitude to the Vietnamese people than the French to whom he is, in theory, opposed.  He thinks of Phuong, and her countrymen, as childlike and naive, not realising how he is being manipulated politically and in his private life.  With his covert mission to create a Third Force, which will provide an alternative to the French and the Communists, Pyle ignores the evidence in front of him and unquestioning follows the tenets he’s learned from the mythical York Harding, blinkered to the fall-out, the ‘collateral damage’ that this course of action could cause.  In fact, as events increase in severity, he dismisses the deaths of ordinary people as casualties of war, a necessary evil.  I found it fascinating to see how precisely his attitudes still mirror those expressed by American leaders in the intervening years and in the present day, almost always with consequences ranging from problematic to downright disastrous.

All this being said, while I found The Quiet American intellectually engaging, with an interesting premise, I found it lacked suspense with regard to the fate of Pyle (which of course I won’t reveal) and felt that the effect of Fowler’s detachment, even in situations where he becomes angry, meant that I didn’t engage as much with the characters as I might otherwise as have done. The result of this was that I didn’t ‘root’ for Fowler anywhere near as much as I might have done, which again meant the revelation at the end of the book was less affecting.  I did enjoy the book, and would recommend it, however it wasn’t, for me, a complete masterclass. Next on my list of Greene to read will be Brighton Rock.  Wish me luck…

The Quiet American is available in paperback from Vintage at £7.99