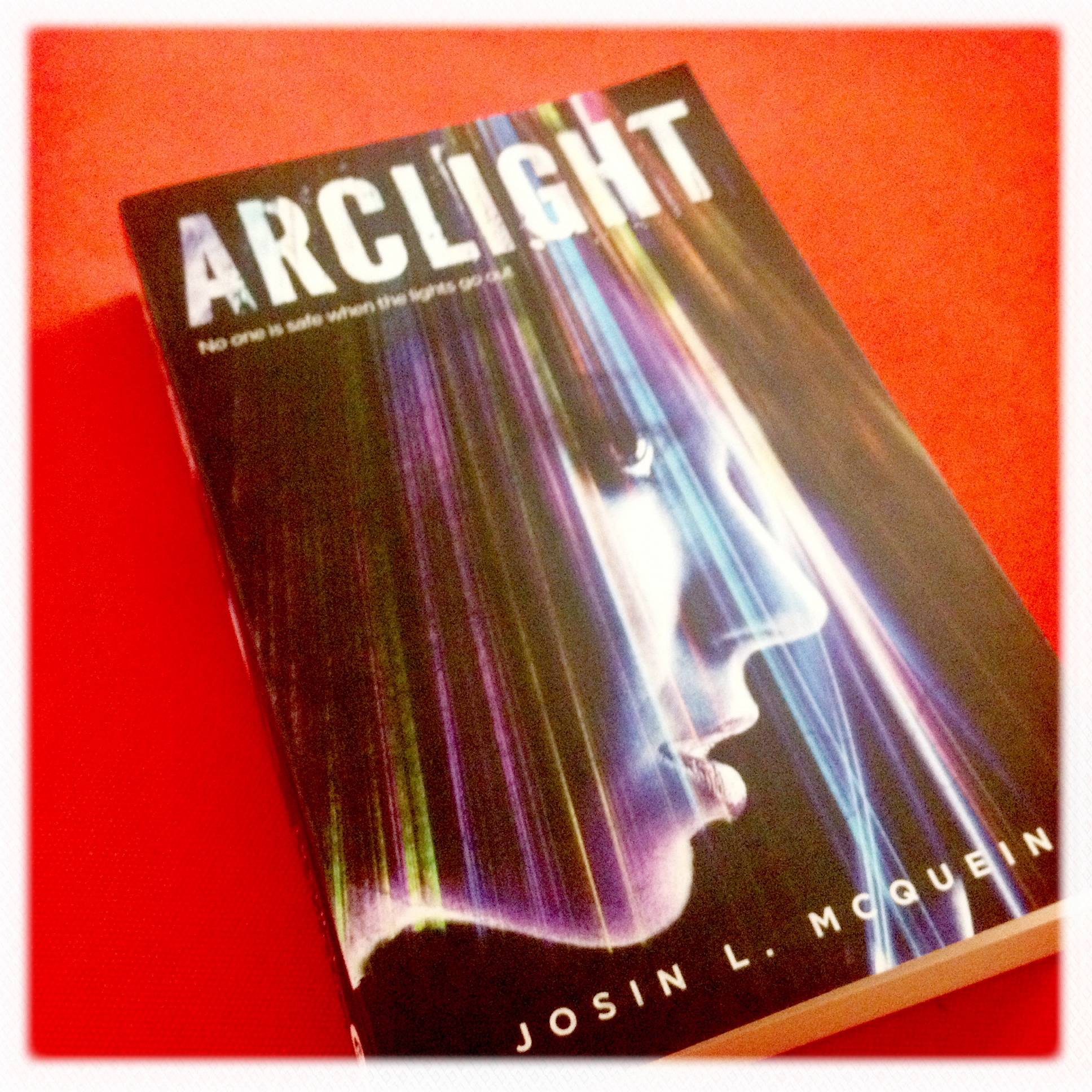 The first rule of Arclight: Light is safety.  Light is life.

The second: Never go outside alone.

The third: No one ever comes back from the dark.

Marina can’t remember anything about her life before she stumbled out of the Dark and into the Arclight.  Where has she come from?  How has she survived?  And why do the rulers of the Dark seem determined to destroy her? To find out, she will have to venture back into the Dark...

I really enjoy reading well written young adult SFF, and I’m not afraid to admit that I still get a chill up my spine when things go bump in the night, so I was really keen to read Arclight and Electric Monkey were kind enough to provide a copy.  In this story, Josin L McQuein creates a plot that twists and turns, keeping me guessing at each new development and surprised by each new revelation.  There’s a great combination here of the personal, with burgeoning relationships, and the scientific, introducing futuristic technologies, mixed with a hint of fantasy too.

We meet Marina in a classroom, in some kind of careers lesson, but events quickly take a turn for the worse as the walls change colour, blue then purple, then finally we’re at ‘Red-Wall’ – they’re inside the building.  They, in this case, are horrifying monsters known as The Fade.  If they break your skin, you become infected, black swirls spreading over you until you are no more.  Normally, they’re kept away by the blazing lights that form a perimeter around the stronghold the humans inhabit – some kind of former military base – and their infection can be stopped by fire, but they seem to be becoming bolder.  What do they want?

There is a love story in Arclight, as there so often in YA SFF, which does seem familiar – Tobin is troubled, he resents Marina as his father died in the the mission to rescue her but he softens towards her as he recognises in her an isolation he feels himself.  However, Tobin isn’t just there because he’s a genre convention; he’s a well-realised three-dimensional character who adds to the story, as well as being a foil to allow Marina to realise more about herself and her origins, which she can’t recall.

What I enjoyed most about Arclight was the way in which ideas, information and revelations are slowly dropped in to the narrative, a little at a time, allowing the reader to gradually understand what may be going on. No ‘infodumps’ for McQuein; she manages our expectations masterfully.  At the beginning of the story, we have no idea if we’re even on Earth, but we are able to work out that the setting is this planet, in the future (although even how long is unclear).  Something slow and insidious has resulted in the loss of more and more of the world to the Dark – again how much is not known – and even the most normal of things – planes, phones – have become children’s tales.

The same applies to Marina and Tobin’s enemies.  The Fade are extraordinary monsters – it takes some time for McQuein to allow us to understand what they are, but along the way they seem at times alien, an experiment gone wrong or even magical or fantastical.  I certainly found they very scary!  Once their nature is revealed, some of the tension of the first part of Arclight is lost, naturally, but this is when a more personal theme emerges and we also realise that the adults who seem to be protecting Marina and her classmates may not be as trustworthy as they appear.

Arclight is a stylish, exciting young adult SF thriller; the open and accessible text makes it an enjoyable read, but it’s also a page-turner because of the constant tension and thriller-like structure too.  If you’re feeling brave, give it a try – but make sure it’s nice and bright before you start.

Arclight is out now from Electric Monkey (Egmont) in paperback at £7.99