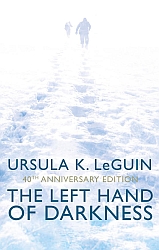 Mr Ai has been sent to observe the inhabitants of the snow-bound planet of Winter.  An androgynous people, like animals they enter phases of sexuality and can be both mother and father at different times in their lives.  To Mr Ai they seem alien, unsophisticated, confusing.  But during a long tortuous journey across the ice, he finds himself losing some of his progressional detachment, befriending one of their outcasts, and reaching a painful understanding of their true nature.  But will he ever learn to see them as they see themselves?

The Left Hand of Darkness is now seen as a science fiction classic, which won both Hugo and Nebula awards for best novel.  It was the first true science fiction book I read – and loved – and it holds a very special place for me because of the way it challenges our preconceptions as well as transporting us to a fascinating world of difference and contradiction.

Genly Ai (or Genry, as the locals call him – they can’t pronounce ‘l’) is a sort of first Ambassador from the Ekumen to Gethen, or Winter.  That’s a galactic federation of worlds populated by humans – or humanoids – who, while lightyears apart, are still able to communicate ‘in real time’ using a device called an ansible, and are able to trade ideas, expertise and goods in an galaxy-wide cultural exchange for mutual benefit.  Advance observers who visited previously, in secret, thought Winter, with its two main nations of Karhide and Orgoreyn, might be ready to join them but Genly finds that suspicion and conspiracy follow him everywhere and that the powers that be are keen to use him for their own ends, rather than listen to his message of inclusion and peaceful coexistence.  His mission is also hampered by the Gethenian concept of shifgrethor, similar to face or personal honour, of which he has none.  However, those he deals with have plenty, which they’re unwilling to risk taking a chance on him.  What if he’s a sham?  Humiliation – and social-political suicide – would be the inevitable result for Genly’s supporters.  The one person who supports him, Estraven, Genly mistrusts due to his manipulation of political situations, although he gradually realises his mistake as events take a turn for the worse and he finds himself in desperate need of help.

In some ways, then, The Left Hand of Darkness is a political conspiracy thriller but really, it’s far more about the social mores of the Gethenians and of Genly himself, and the way in which the two groups reevaluate themselves as their association continues.  The pace of the plot is not fast, and is interspersed with Gethenian folk tales, origin stories and even a section from the first-contact report into the sexual aspects of Gethenian society, all of which give us an additional insight into Winter’s culture and Genly’s experiences there.  He finds Gethenian androgyny distancing, and even makes some vaguely sexist comments about the effeminacy of Estraven, which he finds off-putting at the beginning of the narrative.  However, there are clear advantages; unlike Genly – and us – Gethenians are not bound to certain stations in life by their gender and thus have a more equal, less aggressive society.  Interestingly, the personal pronoun used to refer to Gethenians, whether in somer (androgyny) or kemmer (effectively ‘on heat’, as male or female) is ‘he’ – Le Guin wants us to think about our own world view and whether we subconsciously (or deliberately) place one gender above the other.  This also has implications for the way we think about sexuality more widely; while Gethenians only have sex in a male/female pair when in kemmer, their sexuality is fluid in the sense that, next time, they may manifest the other gender, so the notion of hetero-, homo- or bisexuality becomes null and void.  Anyone could be anything, without judgement or prejudice attached.

Le Guin is also commenting on the paranoia of nations and the way in which they control information, as well as our attitude to exploration.  This novel was published in 1969, the year in which the Apollo 11 astronauts became the first humans to walk on the moon. Despite this giant leap for mankind (my italics), the US and Russians were still in the throes of a cold war which meant suspicion and rumour were rife, with artists and writers regularly being shut out of society for their supposed sympathies, or worse, with the threat of possible obliteration looming if anyone made a wrong move.  Also, in many ways, the Civil Rights movements of the mid-twentieth century were only just beginning to take root.  Martin Luther King’s life, and death, may have made America sit up and take notice, but change was slow and Apartheid was still in full swing in South Africa, despite protests and boycotts.  Genly’s somewhat patronising attitude to the Gethenians, despite his nominal objectivity, flags up liberal Western prejudices, stemming from a unspoken assumption of superiority of civilisation.  Plus, in the mistrust, censorship and misinformation about Genly and his mission emerging from the media of both Karhide and Orgogeyn, we can’t help but see parallels with the propaganda and tabloid sensationalism of American and the USSR.

All this could mean that The Left Hand of Darkness becomes an out-dated polemic about inequality and discrimination.  I didn’t feel that when I first read it, in 1997, and I don’t feel that now, rereading it 16 years later.  Le Guin’s prose is sophisticated, nuanced and full of description, at times beautiful, at times visceral, as she evokes the cities and landscapes of Gethen.  Genly’s explorations of the people and their culture is sensitive and moving, as well as strange and confusing – we sometimes feel, as he does, lost and far away from what he observes, for example when he is present during a ritual designed to allow the participants to see into the future.  However, there are also homely details – the interior of rooms, clothes, food – which make the narrative appear more like a real travelogue.  His relationship with Estraven is fraught with tension, as the two struggle to understand each other and the very different ways in which they’re working towards the same goal.  Le Guin’s use of non-English ‘Gethenian’ and futuristic words can be distancing but it serves to remind us that Genly is also an outsider, and places us with him in that position.  Its slow pace may date it, compared to newly published SFF but that may not be a bad thing.

I also feel that, as well as being a wonderfully written story, Le Guin’s sociopolitical themes are as relevant today as they were in 1969.  Despite our best efforts, it’s plain that many people still hold a patronising, pseudo-colonial view of people from non-Western countries; the media still panders to the political leaders; women and those of a non-hetero sexality are still not held in equal esteem by straight white men.  We might not like it – we shouldn’t – but it’s true.  If we can be more like Genly, and be open to reevaluating our own views, we might find our own worlds becoming a better place.

The Left Hand of Darkness is widely available in paperback, and in a 45th Anniversary edition from Little, Brown.

6 Replies to “Review: The Left Hand of Darkness by Ursula K Le Guin”