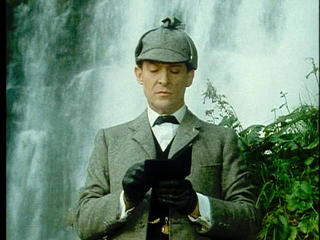 A deadly case for Sherlock Holmes as he battles Professor Moriarty.

Holmes is looking pale and gaunt having had three attempts made on his life. He is being pursued by Professor Moriarty, a criminal mastermind who has London in his grasp with his vast network. Within the next few days Moriarty, a ‘napoleon of crime,’ and his gang are due to be arrested on the basis of Holmes’ investigations.

Holmes asks Watson to accompany him to Europe while the arrests are taking place and they engage in a game of cat-and-mouse as Moriarty and his men try to track them down. As they arrive on the Continent, news reaches them that the Professor has avoided arrest in London.

They travel to Switzerland and visit the nearby Reichenbach Falls. Yet Watson is called away to treat a British woman who has fallen ill at their hotel. As he leaves, he spies a man approaching Holmes who waits at the waterfall. Returning to the scene, Watson finds a note from Sherlock before realising that Moriarty and Holmes have fallen down into the churning waters below…

The fact that Sherlock flees across Europe shows the extent that he is concerned by Moriarty and his gang. An intellectual equal with a bulging forehead, Moriarty is convinced of his superiority as he confronts Sherlock at Baker Street before evading capture by the police. Watson tries to use the skills he has learnt from Holmes to uncover the fate of his friend, arriving at a rather tragic conclusion.

The Final Problem is then less a case to be solved than more of Watson recounting his final hours and becomes a story tinged with sadness throughout as we wait for Sherlock’s time to run out. But is this really end for Sherlock Holmes?

One Reply to “Is this the end of Sherlock Holmes? He faces his Final Problem”