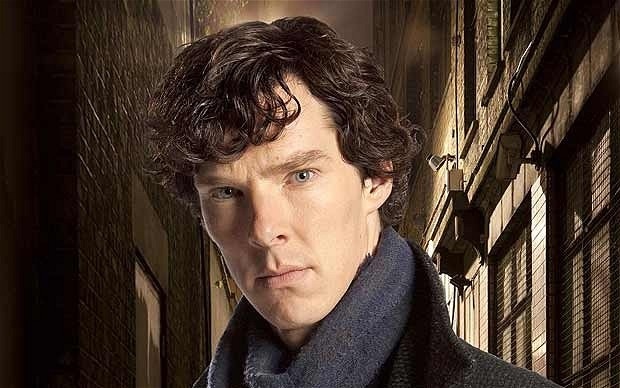 And he’s back. But it took us until the final third of the episode to discover how our favourite detective returned from beyond the grave.

Instead we are treated to an entertaining ‘what if’, featuring bungee cords, hypnosis, and a dramatic kiss. Watching Twitter explode with anger over the Derren Brown revelation, then swiftly take it back, was a delight. And how many of us fell for it?

After the action packed opening things settle down and we see that John is trying to move on from Sherlock’s death. The scene in the restaurant as he attempts to propose to Mary was an awkward delight (since she’s called Mary Morstan, Watson’s wife in the stories I assumed she had to accept) and played with some brilliant comic timing that swiftly turns into unbottled aggression and grief. Mary, played by Martin Freeman’s real life partner Amanda Abbington, was the bridge that finally reunites the two men at last.

Another revelation was meeting Sherlock’s parents – played again by Cumberbatch’s real parents Timothy Carlton and Wanda Ventham. We also saw more of Mycroft and his relationship to his brother over a game of Operation, a relationship resembling the Frasier and Niles characters from the much loved comedy. They are equals, even if they don’t see it that way, but it also says volumes about their loneliness and in turn Sherlock’s need for John. In a entertaining but slightly sad number of scenes, Molly just doesn’t work out as Sherlock’s partner, and as for that boyfriend…

There were two nice references to the title itself ‘The Empty Hearse’. The first was the name of the fan group, headed by Philip Anderson who first describes the Derren Brown-involved opening. Their numerous versions, including one bordering on slashfic, were a commentary on the vast number if theories shared in the two years since that jump from the roof.

The other was an empty Underground carriage, or car as we were told, that leaves the two men alone in the tunnels with a potentially explosive ending. John finally expresses his feelings, a cathartic moment for him even if it leaves Sherlock laughing. The main plot they are trying to uncover wasn’t a particularly fiendish one, as they try to defuse a modern day Guy Fawkes, but considering how much story they had to unravel and deal with was unsurprising.

Which brings us back to Philip and Derren Brown. For Philip, Sherlock’s solution to faking his death was just too pedestrian. It was not exciting or elaborate enough and Anderson refuses to believe it was true. Even then though after it is explained, it is still laced with doubt and suspicion. Was Sherlock’s explanation just not good enough for you? For me, the stopping of the pulse trick was one I’d seen Mr Brown perform, but then there are still enough niggles to leave you wondering. It perhaps wasn’t quite the elaborate answer we as an audience were looking for (it perhaps might not even be the answer) but it was a satisfactory conclusion.

Tomorrow we look at where it all begins in A Study in Scarlet while on Sunday it is John’s wedding and Sherlock’s challenge to meet the duties of best man. In this situation there won’t be an off button…