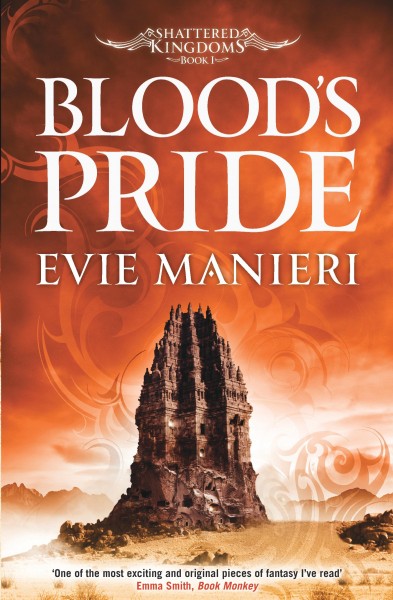 Generations have passed since the Norlanders’ great ships bore down on Shadar, and the Dead Ones slashed and burned the city into submission, enslaving the Shadari people.
Now the Norlander governor is dying, and as his three children struggle against the crushing isolation of their lives in the desert, the time has come for the Shadari to fight back – and they have a secret weapon: the Mongrel, an unbeaten mercenary warrior.

But the Mongrel’s terms are unsettling, she will name her price only after the Norlanders have been defeated, leaving the Shadari to decide: is the price too high for freedom?

It’s been a long time since I read an original off-world SFF novel from a female author, so I was excited to receive a copy of Blood’s Pride, the first in Evie Manieri’s Shattered Kingdoms series. My main touchstones in the genre are Ursula K Le Guin and Iain M Banks; the problem with this is the very high bar that I’ve unconsciously set. Nonetheless, this is a fascinating concept – three competing races vying for control in a world that seems part desert, part mining village and part Viking colonialist settlement.

There were two aspects I particularly enjoyed in Blood’s Pride. The first is the equality of the gender politics within the novel. In Norlander society, women are not submissive or subservient but are recognised as powerful warriors in their own right, even if few of them have made it as far as Shadar. The battle of wills between Isa and Frea, daughters of the Norlander governor, and the way in which they command the loyalty of the male Norlanders around them was compelling. In Shadari society, as created by Manieri, woman are less respected and required to be more subservient but this is shown to be a very bad idea when the failure to heed female advice leads to a much more dangerous situation for the Shadari rebels.

I also enjoyed the exploration of the world that Manieri creates. I was fascinated by the idea of the high palace, carved out of the very landscape itself now the stronghold of the Norlanders, the coastline, dusty Shadari villages – which I pictured like whitewashed flat-roofed North African or Middle Eastern traditional buildings – and the exotic desert inhabited by the third people in this novel, the nomadic Nomas, who revere the Sun. I would have liked to have seen more in the way of plants and creatures as a backdrop to the action, to complete the scenes.

I was hooked by the twisting plotline, as the Norlander siblings turn on each other in an attempt to secure power, and the Shadari, with the help of the Nomas, try to regain their birthright by forcing the Norlanders to leave their land and end the exploitation of their resources. Despite being engaged enough to read to the end, however, this novel didn’t completely work for me. There is an enormous cast of characters – truly huge – to the point where I began to have trouble keeping track of who was who, and who was in league with which different group within the action. I think this issue would have been helped by addition character development around the key players – Isa, Frea, and Eofar of the Norlanders, Daryan and Harotha of the Shadari – so as to make them standard out more against the people around them. I would have loved to connect more emotionally with those characters, who were going through some harrowing trials, but I didn’t get that ‘gut-punch’ effect this time.

A character who did ‘work’ for me was the Mongrel. In my reading, she was the character who intrigued me most, her mysterious origins and hatred for the ruling Norlander family gradually revealed and explained as the story progresses. I also thought the final climactic conflict scenes were successful, as the tribes take to the terrestrial and aerial battlefields to end things, one way or another. For others, this may have been even more dramatic to read, if they were more greatly invested in the key characters.

Over all, I think Manieri has created an interesting world, peopled with strange but relatable groups, and is addressing some important issues around colonisation and the way that people are controlled through her storylines. I don’t think I’ll personally be continuing with the Shattered Kingdoms series, but only because I’d like to look for something else that will connect with me on a more emotional level. If you give this a try, I’d love to hear your thoughts.

Blood’s Pride (Book 1 of the Shattered Kingdoms series) is out now published by Jo Fletcher Books, in paperback at £8.99

Thank you to Jo Fletcher Books who kindly provided a review copy of Blood’s Pride for me to read. They also kindly sent a couple of other titles which I’ll be reading and reviewing for you soon.