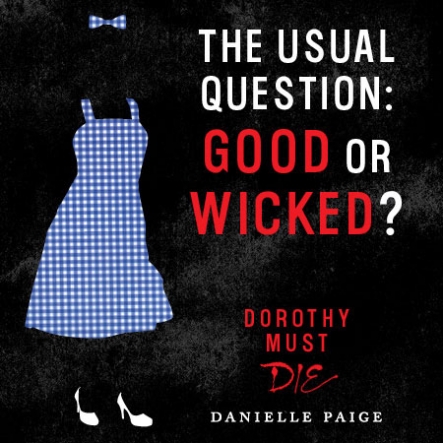 I didn’t ask for any of this. I didn’t ask to be some kind of hero.
But when your whole life gets swept up by a tornado – taking you with it – you have no choice but to go along, you know?
Sure, I’ve read the books. I’ve seen the movies. But I never expected Oz to look like this. A place where Good Witches can’t be trusted and Wicked Witches may just be the good guys. A place where even the yellow brick road is crumbling.
What happened? Dorothy.
My name is Amy Gumm – and I’m the other girl from Kansas.
I’ve been recruited by the Revolutionary Order of the Wicked, and I’ve been given a mission:
Remove the Tin Woodman’s heart.
Steal the Scarecrow’s brain.
Take the Lion’s courage.
And then – Dorothy must die.

I’m a huge fan of the musical Wicked and the idea of reinventing and reimagining existing classics – I have a whole playlist on iTunes of excellent covers – so I was pleased to be invited to read Dorothy Must Die by Danielle Paige, which is published in the UK by Harper 360. I was also drawn in by the brilliant cover design, which invites readers to think about the difference between what you see on the outside – gingham dress, ruby slippers – and what lies underneath.

What I found, between these covers, was a no-nonsense, wise-cracking narrator from the wrong side of the tracks, and what began as a fast-paced plot line in a great inversion of the original Wizard of Oz story.

Rather than in Wicked, which begins before the start of The Wizard of Oz and argues that Elphaba, the so-called Wicked Witch of the West, was in fact misunderstood and misrepresented, Dorothy Must Die takes place long after the events we’ll have seen or read about previously. In Danielle Paige’s novel, there are far more shades of grey than we might have thought. As she tentatively ventures into the world of Oz, Amy Gumm discovers that the concepts of ‘Good’ and ‘Bad’ are more about a balance than necessarily describing the actions of the person in question. We also have to reevaluate our views of Dorothy, because it seems that she returned to Oz with a hunger for power and, more importantly, the magic that is at the heart of the whole land.

I enjoyed Amy as a narrator, incredulous of the world around her, the extraordinary people and creatures she meets and the power that she eventually – reluctantly – learns to wield. I felt Paige had created a believable teen, replete with slang, grumpy tendencies and a rather cynical outlook on life. I found her tentative attraction to a male member of the Revolutionary Order of Witches believable in its confusion and her reluctance to acknowledge her own talents sadly familiar.

Not all of Dorothy Must Die worked for me as well as this. When I started reading, I thought this was going to be a standalone novel (there’s nothing on the cover to suggest anything different) and it began by romping along at a good pace. Then, there was a bit of a dip in the speed of the action while Amy is learning her magical craft – she spends a long time honing or refusing to hone her skills and trusting then mistrusting her witchy instructors. After a shocking conflict scene, Amy is finally dispatched to begin to carry out her mission, and I was pleased with the change of scene and the new set of characters but, still, the pace didn’t pick up. Finally, I realised why so little had been achieved over 452 pages – this is the first in a series. I don’t know if I was supposed to know this before I started reading, if Paige has been signed up for a three-book-deal, or it it’s just a statement of intent, but I really felt that, after a whole book, Amy wasn’t that much further than when she started.

Some of the dialogue also seems a little off, somehow. Amy is an American highschooler but some of the Ozians also speak with the same inflections, as if they’d been to Kansas too, using current slang not originating within their sphere of experience. I was willing to go with that as it fitted with the overall tone of the book, but occasionally I was caught off guard but a phrase that didn’t seem to fit in the mouth of the character saying it.

Now that I know this is a series, and I’m coming to it with those expectations, I’m intrigued to read on and see what happens, because I’ve enjoyed spending time with the characters. It’s not a particularly challenging novel, or the most original plot line, with elements I found familiar from other Young Adult reads, but it was quick, fun to read, with some engaging action scenes, perhaps just improved with a bit of a trim to the ‘training’ sections. Hopefully, this will be evident as the series progresses.

Thank you to Harper 360 for providing a review copy of Dorothy Must Die, which is out now in paperback.

If you want to discover more, here are some links: