In Frogkisser! Garth Nix returns with his very own modern fairy tale, starring Princess Anya, who, with her loyal dog, must embark on a terribly important (capital Q) Quest to acquire the ingredients for a reversal lip balm, the vital item needed to change a frog back to a prince . . . oh, and save her kingdom from her villainous step(step)father. END_OF_DOCUMENT_TOKEN_TO_BE_REPLACED

It’s Sleeping Beauty but not as you know her…
Imagine a tower surrounded by briars, a brave prince, and a beautiful, enchanted, sleeping girl…
…and now read the true story of Sleeping Beauty, the the way it always should have been… END_OF_DOCUMENT_TOKEN_TO_BE_REPLACED

A wicked, delicious, sexy Cinderella fairytale.  It’s Cinderella but not as you know her…

Imagine an enchanted footman, two ugly sisters, and magical ball and a romance to remember…
…and now read the true story of Cinderella, told the way it always should have been… the downtrodden young girl whose life of drudgery and servitude at the hands of her cruel and abusive stepsisters is broken by the arrival of a Fairy godmother, a pumpkin coach and glass slippers.  The only thing that should possibly go wrong is if she misses that midnight curfew… END_OF_DOCUMENT_TOKEN_TO_BE_REPLACED 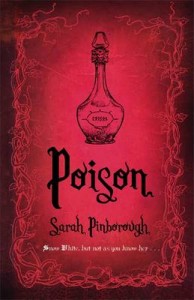 It’s Snow White, but not as you know her…
Take a wicked queen, a handsome princess, and a poisoned apple…
…and now read the true story of Snow White, told the way it always should have been…

Snow White is loved throughout the kingdom.  Carefree and kind, she’s won the hearts of her people and the envy of her young step-mother, who rules through fear and magic while the king fights a war far, far away.  Ruling would be so much easier without everyone transfixed by the young princess.  When a huntsman arrives at her door, the Queen sees her chance.  All she wants is Snow White’s heart…

When you hear the phrase ‘fairy tale’, what does it make you think of?  Disney? Princesses, witches, a handsome prince?  In Poison, Sarah Pinborough brings us all of this and more, viewing the story through grown-up eyes and telling it for adults, while still playing with the conventions we grew up with. END_OF_DOCUMENT_TOKEN_TO_BE_REPLACED

Darkness in Literature – The Snow Child

A fascinating article on a book that we thought was great. Kate thinks all fairy tales need some darkness.


Jack and Mabel have staked everything on making a fresh start for themselves in a homestead ‘at the world’s edge’ in the raw Alaskan wilderness.  But as the days grow shorter, Jack is losing his battle to clear the land, and Mabel can no longer contain her grief for the baby she lost many years before.

The evening the first snow falls, their mood unaccountably changes.  In a moment of tenderness, the two are surprised to find themselves building a snowman – or rather a snow girl – together.  The next morning, all trace of her has disappeared, and Jack can’t quite shake the notion that he glimpsed a small figure – a child? – running through the spruce trees in the dawn light.  And how to explain the little but very human tracks Mabel finds at the edge of their property?

Written with the clarity and vividness of the Russian fairytale from which it takes its inspiration, The Snow Child is an instant classic – the story of a couple who take a child into their hearts, all the while knowing they can never truly call her their own.

I have always enjoyed magic realism and fairytale stories, but I wasn’t expecting to be as immersed in this story as I became.  The journey into Frontier America was magical in itself, with beautiful descriptions of landscape, wildlife and the hardships faced by those brave souls who chose to live there.  To combine this with the tradition Russian story of a snow girl who can only remain until the Spring thaw was inspired.

I found the characters Jack and Mabel really engaging – Ivey has done a brilliant job creating these intricate, loving personalities, with their bittersweet past.  I also loved their neighbours – loud, brash but incredibly kind and generous, embodying everything about the pioneer spirit.  I especially enjoyed the fragile love story that develops in the last third of the book between the snow girl Faina and the boy Garrett; once I understood the fairytale, I thought I’d worked out the only possible way the story could end for Jack and Mabel, but this twist kept me hooked right up to the bitter end.

I’d highly recommend this novel to anyone who enjoys Americana, magic realism or just a family drama and a good adventure.  Get the hardback if you can – the cover is delightful.

The Snow Child is published by Headline